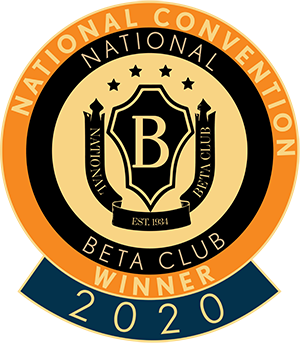 The last few months, National Beta members from Harvester Christian Academy have been working hard to submit their entries for the National Beta Virtual Convention. In late July, they were able to celebrate that hard work when Nicolas Miranda was announced as a winner in the 10th grade science competition, placing 5th nationally.

Harvester’s Beta Club has had a history of excellence since its founding in 1997, earning honors such as School of Merit and School of Distinction. In the 2019-2020 school year, Harvester had 64 senior and 25 junior Beta Club members.  45 of those students competed in the state convention in multiple events, including academic tests, character skits, executive board candidacy, jewelry, art, and photography.

As it is a service club for academically talented students, Beta members are required to serve their community for at least 40 hours each school year and maintain excellent grade point averages.  This year, despite Covid-19, Harvester Beta Club members logged a total of 1,625 volunteer hours! Club sponsors Tarrah Walston and Chaney Billips provide ample opportunities for students to complete the required service hours by partnering with the Special Olympics in Paulding and Douglas Counties and the Pregnancy Resource Center.  Additionally, Beta members serve the school by volunteering to help with academic competitions, fall festivals, grandparents’ day, and more.

“This year, we had the privilege of not only having a student place 5th at the national convention, but we also had the honor of having the Georgia State Vice President in our club. Nicolas Miranda did a fantastic job of representing us at Nationals and Bamidele Idaomi demonstrated his wonderful leadership abilities at our state convention, where he was elected, and has big plans for guiding all of the Georgia clubs. We are incredibly proud of the Beta Club at Harvester,” said club sponsor Chaney Billips.

The National Convention, originally planned to be held in Fort Worth, TX, was cancelled due to health and safety concerns stemming from the Coronavirus pandemic. However, over 12,000 Junior Beta (grades 4-8) and Senior Beta (grades 9-12) students were able to represent their schools in the first National Beta Virtual Convention. With more than 500,000 active members and 8,750 clubs nationally and internationally, National Beta has become the nation’s largest independent, non-profit, educational youth organization. National Beta promotes the ideals of academic achievement, character, service and leadership among elementary and secondary school students