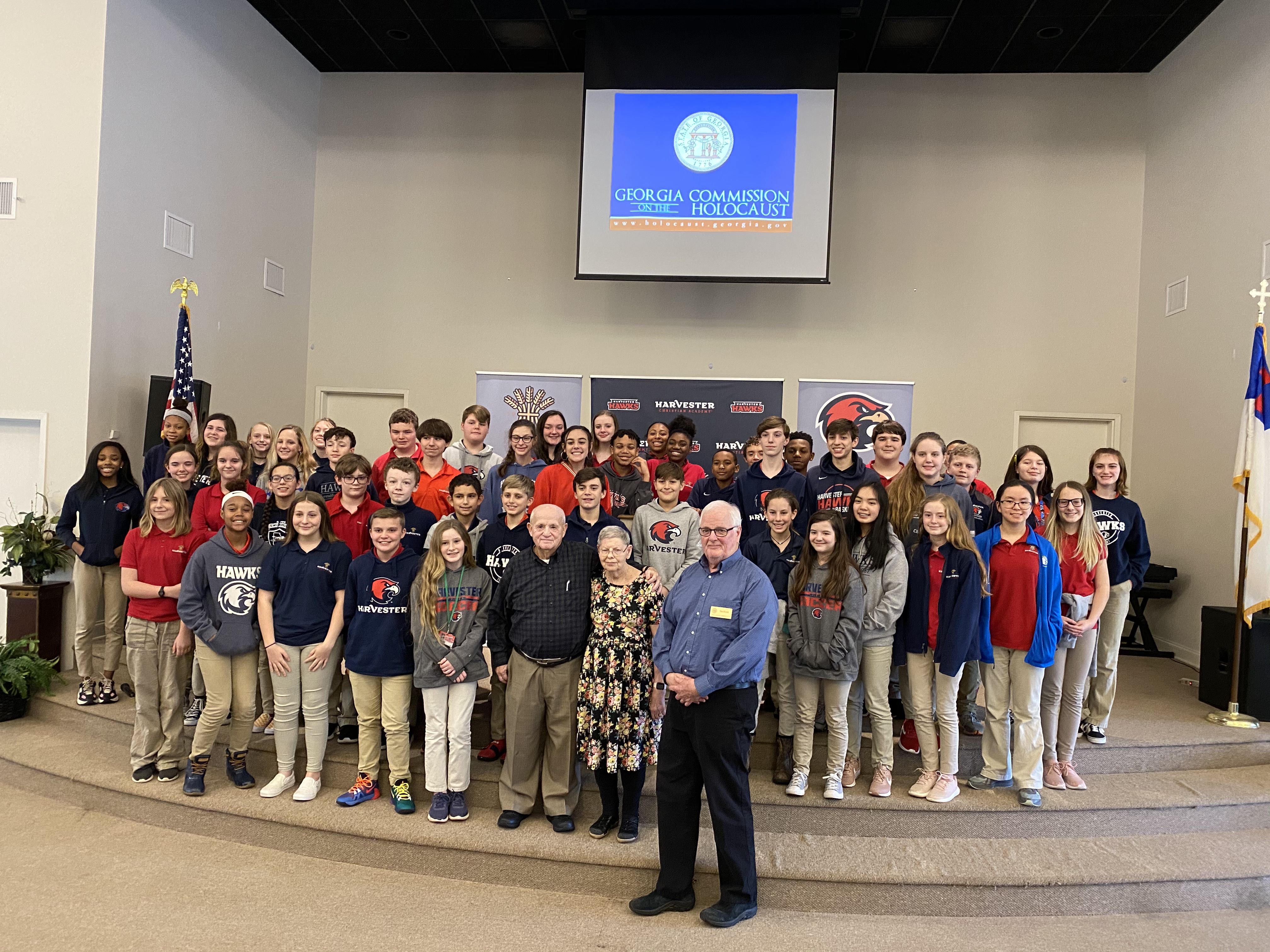 On February 13, Hershel Greenblat spoke to the students, teachers and parents of fifth through ninth graders at Harvester Christian Academy, recounting his first-hand stories of the Holocaust.

Greenblat was born in the early days of World War II, shortly after Hitler invaded Poland.  After the invasion, Jewish survivors were put into ghettos, crowded into homes, starved, and controlled by soldiers and barbed wire fences.  His parents escaped their respective ghettos and joined a group of resistance fighters, who settled in underground caves in Ukraine, where his parents met, married and gave birth to Hershel Greenblat in 1940.

Hershel was 5 years old when the war ended but they had no home, no family, and no place to go.  With the Russian police still hunting Jews, his family had to travel 1800 miles to a Displaced Persons Camp (DP Camp) in Salzburg, Austria.  To go undetected, they travelled in box cars at night and it took then 8 weeks to reach their destination.

When they arrived at the DP Camp in Salzburg, Hershel weighed a mere 17 pounds.  The family was nearly starved to death and covered in lice (Hershel still has scars from the lice).  While most of Greenblat’s holocaust story is a retelling of his parents’ own stories, he remembers everything from the time he arrived at the DP Camp.  “I remember getting clothes and food.  I remember being deloused.  And my memories of the DP Camp are white, very white, because everything seemed so clean,” he said.

After living in the DP Camp 5 years, Greenblat’s family was transferred by naval ship to America.  When they arrived on Ellis Island, they were given milk & donuts, the first donut he’d ever had.  They were also given hygiene kits from the Red Cross, which included a toothbrush, the first toothbrush he’d ever had. A kind stranger gave him a half dollar, the first coin he’d ever had, and he carries it with him to this day.

The Greenblat family didn’t speak English, had no money and nowhere to go.  With the help of a sponsor family in Atlanta, the Greenblats moved to the Summerhill area of Atlanta.  His neighbors were exclusively black at a time when racism was rampant.  After surviving the racism of the Holocaust, the Greenblats sympathized with and tried to help the black community. “We were discriminated against simply of our religion and they were discriminated against simply because of the color of their skin.”  Their efforts caught the attention of Dr. Martin Luther King, Jr., who lived nearby and with whom they became friends and worked together for human rights.

After a tumultuous life, the Greenblats became a part of the fabric of America.  They learned English, became business owners (they opened a grocery store with the help of a loan co-signer), fought for civil rights, and had children and grandchildren who went on to become doctors, lawyers and teachers.

“I do not enjoy reliving my history but it is my purpose.  I need to pass on the responsibility of educating the world about the Holocaust to you,” Greenblat said.

To a packed auditorium, Greenblat ended with, “whoever listens to a witness becomes a witness himself.  What will you do when you see discrimination and hatred?”  He issued a challenge to the crowd: “help eradicate hatred; the Holocaust happened because of hatred.  Don’t let it happen again.”